The Hillside Diary and Other Writings 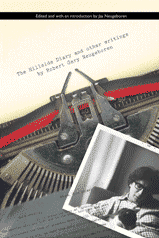 The Hillside Diary and Other Writings

Valuable resource to inspire hope for people experiencing psychiatric disability, for their families, and for mental health professionals.

It was 1962 and Robert Neugeboren, just shy of his nineteenth birthday, experienced the first of what would be many psychiatric hospitalizations. For the first six months of this first hospitalization, Robert kept a diary of his daily life at Hillside Hospital.

The Hillside Diary and Other Writings includes this diary, and selected letters and poems written by Robert over a period of many years and many hospitalizations. Compiled and edited by Jay Neugeboren, Robert’s brother and life-long advocate, the book also includes family photographs and selected reproductions of Robert’s drawings, diary, poems, and letters.

Robert’s story was first told in Imagining Robert, an award-winning book written by his brother Jay, and a documentary film of the same title that aired nationally on PBS in 2004. The Hillside Diary and Other Writings tells Robert’s story through his own words. This first person account gives a vivid, personal perspective of psychiatric treatment over the years—more importantly, it provides an intimate and honest portrayal of one person’s, and one family’s, tenacious struggle to reach beyond the anguish and frustrations of living with mental illness.

Through these writings we begin to understand how Robert survived: he had hope, he had dreams, he loved, and he was loved. His humor, intellect, love of life, and resilience shine through his writing.

Mr. Neugeboren was born in Brooklyn, New York, in 1943. He attended public schools there, won a New York Regents State Scholarship and attended City College of New York. In his early years, he had leads in many dramatic productions, and starred in several musicals. He spent a large portion of his adult years in mental hospitals, supervised residences, and halfway houses, and lived  in the Clinton Residence in the Hell’s Kitchen section of New York City. He was a member of New York City’s Fountain House, where he worked in various capacities, and is featured in the documentary film, Imagining Robert.

Mr. Neugeboren is the author of at least 14 books, including two prize-winning novels, The Stolen Jew and Before My Life Behan, and two award-winning books of nonfiction, Imagining Robert and Transforming Madness.He is featured in the documentary film Imagining Robert. Professor and Writer-in-Residence at the University of Massachusetts for 30 years, he now lives in New York City.

…Robert Gary Neugeboren’s THE HILLSIDE DIARY is that rare book that demystifies as it depicts mental illness from an insider’s perspective. Collectively, Neugeboren’s poems, letters, diary entries, and drawings reveal an individual who is honest, witty, idiosyncratic, and intelligent. THE HILLSIDE DIARY gives a gift to those of us who seek to better understand.
Wally Lamb, author of I Know This Much is True

…A valuable addition to the growing body of first person psychiatric accounts that will lead the way to a deeper understanding of the struggles of psychiatric patients and of the struggles of their caregivers. All too often the personalities and insights of mental patients have been drowned under the one-size-fits-all care routine. I hope this book will achieve the aims of its writing at bringing light and knowledge into darker places.
Joanne Greenberg, author of I Never Promised You a Rose Garden

…A collection of writings by an individual who has spent most of his adult life in and out of mental hospitals. The book is both sobering and exhilarating, and reveals in a most poignant manner the tragic lives of individuals with serious and persistent mental illnesses. It also reveals in dramatic form the inner thoughts and sufferings of such individuals, and at the same time their hopes for a better life. This wonderful book should be required reading for anyone interested in severe and persistent mental illnesses.
Gerald N. Grob, Henry E. Sigerist Professor Emeritus, Rutgers University, and author of The Mad Among Us

…A reflection on mental illness from the inside out: painful and happy, lost and discovering. Robert Neugeboren gradually becomes a new person, and we watch it all from his wonderfully poetic pages.
Moe Armstrong, NAMI National Board Member and Co-founder of the Peer Educators Project, author of Through the Seasons